FOTOIMMAGINEDANCE,
stems from the specialization of FOTOIMMAGINE's staff on dance events. 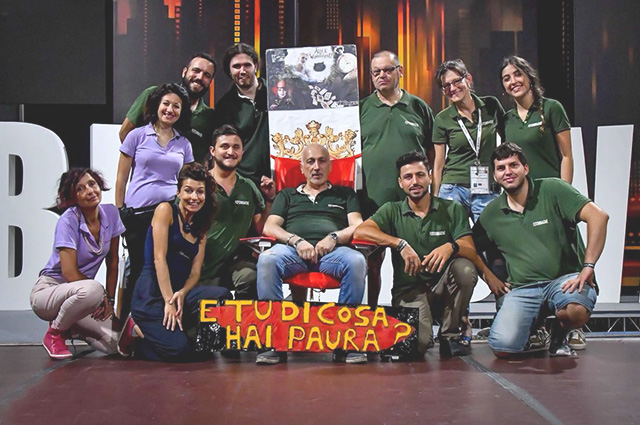 Giovanni Balistrieri started his activity as photographer in 1975 and, only after five years (1980), was official photographer for the first motocross Superbowl in Genoa (Liguria, Italy) and for Piaggio Gilera company for the Motocross World Championship.
In 1983 Cinzia Cossu joined FOTOIMMAGINE.
In 1989, even as result of artistic evaluations, our studio won a tender for the provision of photo shoots at the Opera in Genoa until 1992.
In those years picture taken by FOTOIMMAGINE has been sistematically pubblished on international newspaper and magazines.
In publishing worked for the De Vecchi publishers, providing all the photographic goods for the composition of entire series of books specialized in the field of dog breeds.
A similar work has been made for Olimpia company.
In 1992 FOTOIMMAGINE became offical photographer of Mikhail Gorbaciov for COOP.
In 1995 has been official photographer for the Tina Turner's live concert in Liguria.
Photographer for the spot for Findus and Pirelli.
Official photographer for the Ministry of Interior to provide photographic services concerning the construction of new branch offices.
Campagna promozionale vari rappresentanti politici nazionali.
With the advent of digital photography, FOTOIMMAGINE has acquired all systems for shooting and immediate printing, becaming specialized even on this market.
Since 2002 photographer for FIDS events, in 2007 for Italian championships.
In 2003 Azzurra Balistrieri joined FOTOIMMAGINE.
With a route started at High School (Liceo Artistico) and Bachelor Degree (Conservazione dei Beni Culturali), finished with a Master Degree (Storia dell'Arte e Valorizzazione del Patrimonio Artistico), she enriched the quality and professinality of the studio. In addition to dance, she cooperate with the Genoa university in publishing books and magazines about historichal and artistic topics.
In 2005, Giovanni Balistreri become a Nikon NPS photographer, with card No. 5641 (international).
In 2012 Giovanni and Azzurra Balistreri established FOTOIMMAGINEDANCE studio.